The Alphabet - one roll of film, shot in one day

Last weekend I took part in the “Roll in a Day” Flickr group’s monthly challenge. The idea is simple; to use up an entire roll of film in a single day. To make it interesting the group organisers suggest themes that you can focus on, and November’s theme was “The Alphabet”. I set out to take 26 exactly pictures, in alphabetical order.

Once you’ve finished your roll and had them developed and scanned, the idea is to make a contact sheet and upload it to the Flickr group. Here’s mine: 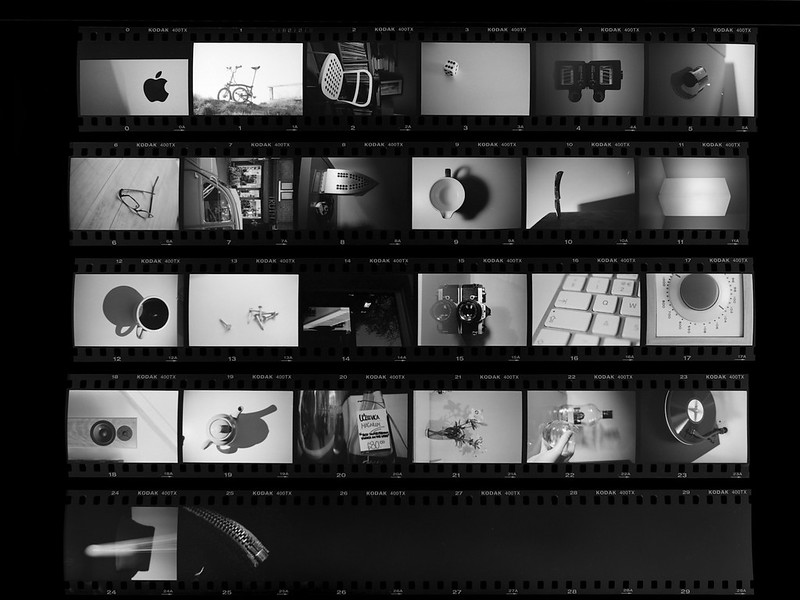 It’s far harder than you might imagine to find 26 images (in alphabetical order) that you like well enough to commit them to film. I deliberated a lot over the first few, and soon noticed that each picture was taking over half an hour to set up and shoot.

I managed to get the average time per photo down to around 20-30 minutes, but it turned out to be a very long day.

It was interesting to take photography a little bit more seriously for once. By the time you’re halfway through a project like this, you’re reluctant to stop. You want to make good on all the time you’ve invested so far, so you press on. I took the last photo just ten minutes before midnight.

You can see full size photos for the entire roll in this Flickr album, but I’ve included a couple of my favourites here.

J is for Jug

There’s nothing particularly special about this photo, but I really like the thick dark greys in the jug’s handle, and the texture the film grain lends to the inside of the jug, and the spout (you might need to look at a larger image on Flickr to see it).

It’s my favourite shot from the whole roll. I think I’ll print it. 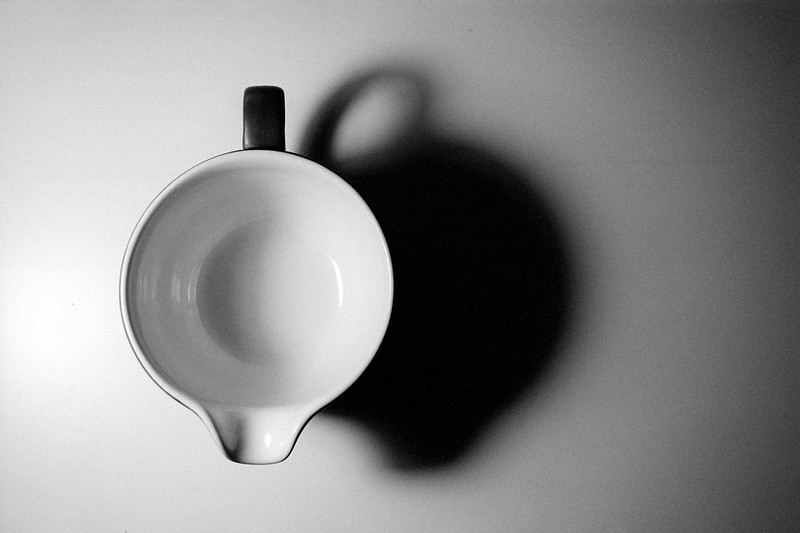 E is for Exposure Meter

I took these photos with a Pentax SV, which is a manual SLR from the early 1960s. It was one of the first SLRs to have an automatic frame counter, but pre-dates through-the-lens exposure meters. This photo is of the SV’s external meter that clips on to the top of the prism housing. 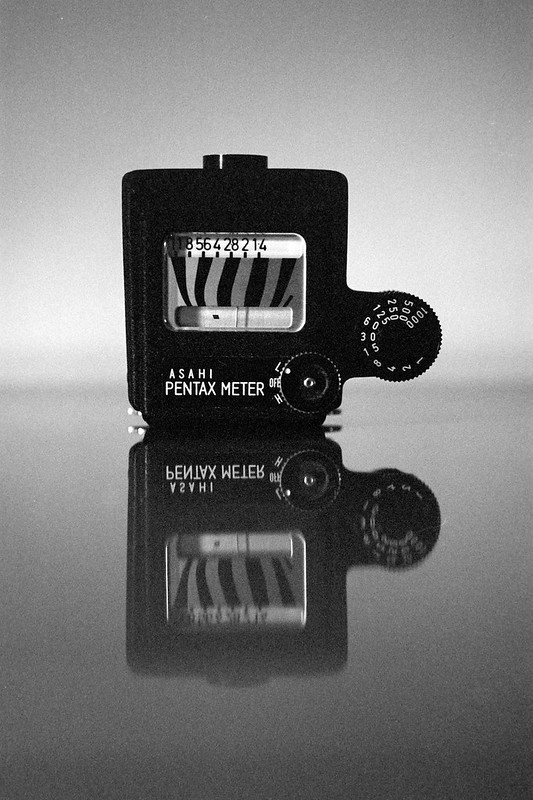 Amazingly, it still works, and gives accurate readings (though I didn’t use it for this roll). In this shot it’s telling us that the ceiling would be well exposed at 1/30 of a second at f2. As you rotate the shutter speed dial on the right, the f-stop scale slides left and right. The needle in the little window in the middle just moves left and right as the light changes.

F is for Film

This is a roll of Ilford FP4+. It’s the film I used when I first tried black and white, as a teenager. It’s high time I put it in the camera and re-acquainted myself with it.

Have a look at the big blobs of grain in the deeper greys in this one. This is what film grain is all about! 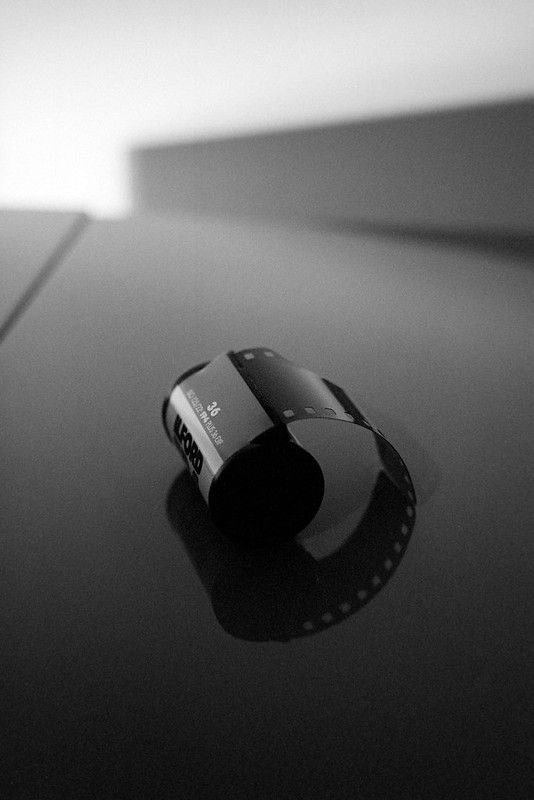 V is for Vase

If I’d taken this with a digital camera we’d probably be able to see more detail in the lighter and darker areas. The eye would be drawn to it, but I’m not sure that it’d be a better photo for it. 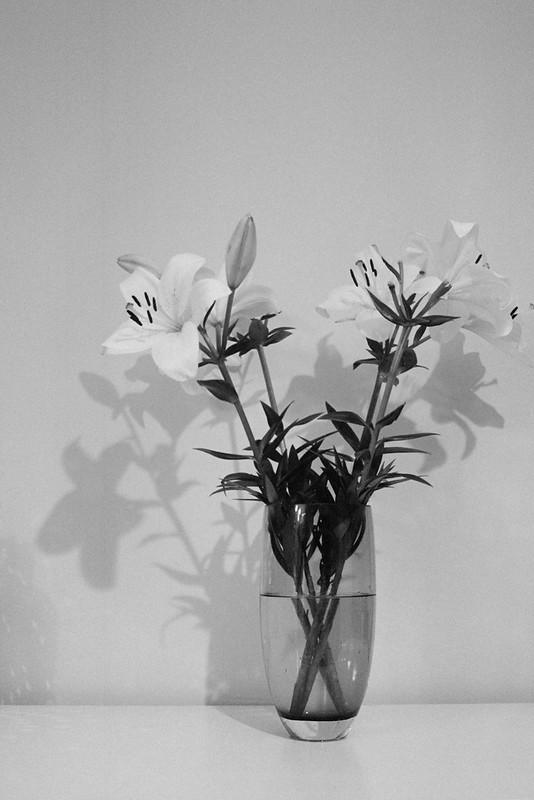 Z is for Zip

I probably like this more than I would, were it not for the fact that I remember it as being the end of a long but ultimately very satisfying day. 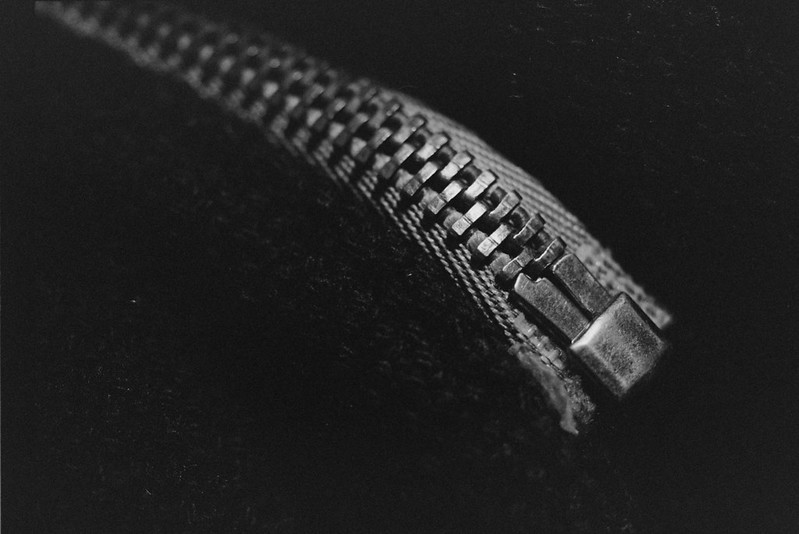 I set out to expose it so that there’d be a little detail in the shadows. The coat this zip is attached to is a very dark blue, which I underexposed by two stops in the hope that we’d just be able to see some detail in the coat’s fibres.

There’s a little bit of shadow detail in the negative (more than is likely to be visible on your screen), and this was a useful experiment.