In 1986 my Dad took me to a camera shop. He'd got me interested in photography by toting his big black Nikkormat SLR up hill and down dale during camping holidays in the Lake District. We always enjoyed the slide shows, and to be fair, he was pretty good at it (don't tell him I said that).

So we were out shopping for my first proper camera. We quickly homed in on a second hand Pentax K1000 with a 50mm f1.7 lens. At the time I didn't appreciate just how good a 50mm f1.7 lens is, and the K1000 (which had only been on the market for eight years) hadn't yet achieved its legendary status. If memory serves, it cost £125. That was a serious amount of cash to a twelve year old boy in the mid '80s.

I was a compulsive saver of my pennies back then, and had managed to stow away a grand total of £87 over the previous twelve years. The K1000 and lens were both in superb condition, with its original box and manual, and my Dad saw it as an investment. I spent 85 of my 87 pounds (which was a big deal to a tight arse like me, on 20p pocket money per week) and my parents threw in the extra £40.

Once I'd got it home I started the serious business of learning the relationship between aperture and shutter speed, and how aperture controls depth of field. ISO was a fixed quantity to me back then, as my parents always gave me ISO 100 colour film to shoot with. It was a simpler time.

Our house had a cellar, with several small unused rooms. Years later we set up a darkroom down there, and I started to shoot black and white. I never learnt how to develop film; it seemed safer to get them developed at a local camera shop. Once I got the negatives back I'd spend hours down the cellar, but somehow only finding time to print a handful of photos.

Watching an image appear slowly in the dim red light of the darkroom is a unique and very satisfying experience. If you've never tried it, I highly recommend it.

Over the last few years I've taken a lot of photographs with digital cameras. Today's technology is incredible. Digital photos are sharp, colours are as vivid (or unsaturated) as you'd like them to be, and you don't need to decide whether you want colour or black and white until after you've taken the photo!

Digital has definitely improved my photography. Instant feedback has allowed me to experiment with composition. Carrying a small yet high quality camera has enabled me to walk the streets with one eye open for interesting images. I keep an eye out for abstract shapes and good light. If I see something new I can shoot it, and it doesn't matter if the photo is rubbish. I can review it, learn from it, and try to take a better shot next time.

And yet, I've tired of looking through countless images that don't mean anything to me. I'm not learning from my mistakes in the way that I used to. My compositions are fine. Perhaps it's the subject matter that isn't particularly interesting. Whatever it is, I feel like I've plateaued.

Earlier this year I read an article by Ming Thein, in which he shared a simple black and white photo of a chain. Something about the deep grey tones in that photo grabbed me. 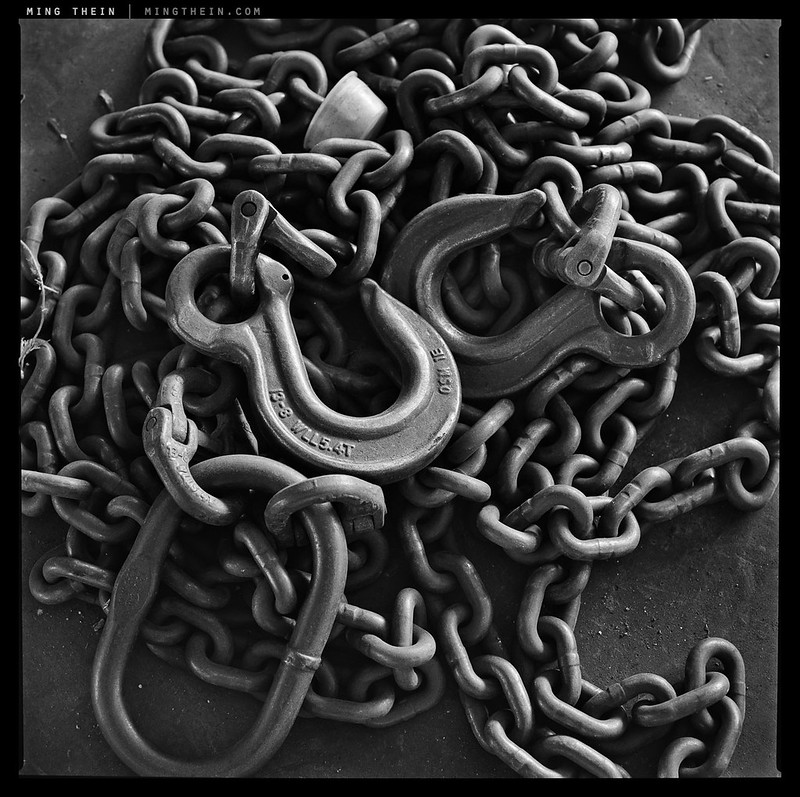 It was taken on Ilford Delta (a relatively recent fine-grained film, and new to me). I made a mental note, and moved on.

A few weeks later, Ming was at it again. He wrote an article called Choosing film or digital, and a little rationale. By this point he'd moved on to Fuji Acros, with which it seems it's almost impossible to blow your highlights. I hate blown highlights. I like the sound of Fuji Acros.

There are plenty of wonderful photos on Ming's site. If you're interested, I highly recommend browsing through his Film Diaries.

My interest was piqued. My K1000 was sitting loyally in a drawer, largely unused for the last 20 years. If I started shooting film again, would I need to post them off to get them developed? There's a great photo lab just four miles from me, but did I want to cycle over there every couple of weeks to drop off/collect film? I did not.

Clearly, if this was going to work I'd need to develop my own negatives.

I started by researching black and white development. I discovered Ted Forbes and his (amazing) video podcast, The Art of Photography. Ted has put together a guide to developing black and white and several superb videos on how to get started.

Contrary to popular belief, you don't actually need a darkroom. Developing a film involves immersing it in several chemicals, one after the other. So long as the film isn't exposed to light before you've developed it you're fine, and you can work in daylight while the film is inside a light-sealed tank. The trick is getting the film out of the canister and into the tank in the dark. You can do it in a big black bag.

It looked like a lot of fun, and fairly easy to get into.

Scanning film on the cheap

Once you've got a negative, what can you do with it? I like to share photos on Flickr, and every now and again make a print to hang on the wall. I loved wet printing in the darkroom, but it's very time consuming and requires a large bathroom or a dedicated darkroom (I have neither). So prints would need to be digital.

How do you get negatives into the computer? The obvious route is to buy a film scanner. If you do a few hours of research you'll discover three things.

Shooting some more film was supposed to be a cheap exercise. An experiment. I'd read about people photographing negatives with a high quality digital camera and post-processing the resulting image on the computer (in fact, this is how Ming was doing it). This sounded more like it, as I already owned the expensive bits.

I found an article on how to copy film with a digital camera and a light table.

The good news is that this cheap approach produces higher quality results than a film scanner, and you don't need to sacrifice any desk space as everything packs away neatly when you're done.

I bought Paterson's film development kit (with measuring cyclinders, a developing tank, thermometer, clips for hanging the film, etc), a changing bag, and some storage bottles.

Then I started investigating chemicals. Choosing a developer is a complicated business. A good way to compare how developers behave with different films is to search Flickr. I recommend sorting the results by "Interesting" rather than "Relevant" so that the better photos float to the top. Here's an example search for Tri-X and HC-110.

HC-110 seems to produce great results with Ilford FP4+ as well (FP4+ was our standard go-to film back in the '90s and I've got an old roll to develop), so I plumped for that. I also got some Rodinal (which Ted recommended) but based on my Flickr research I prefer Tri-X in HC-110. The Rodinal will come in handy later on...

I bought a vintage 50mm Takumar macro lens, strapped it to the front of my Micro Four Thirds camera and bought a light table for £80 (it's A4 size).

So how did it go?

Getting the film out of the canister and winding it onto a spool when you can't see your hands is a little fiddly, but after a couple of trial runs on an old roll of film I got the hang of it.

I prepared my chemicals (developer, stop bath and fixer), warmed them slightly to bring them up to the requisite 20 degrees, and set to work. After 6.5 minutes in the developer I poured the developer out and quickly added the stop bath. Two minutes later, out came the stop bath, and in went the fixer.

Incidentally, if you're wondering where "6.5 minutes" and "2 minutes" come from, there's an app for that.

Nine minutes later I poured the fixer back into its bottle and started washing the negatives in cold water. Meanwhile, I started cleaning up, and put the lid back on the bottle of fixer.

I couldn't help noticing that even though I'd only mixed 600ml of fixer, there were now 900ml in the bottle. Hmmmm. Curious.

There could only be one explanation. Instead of pouring 300ml of used developer down the sink, I must have poured it into the fixer during the heat of the moment. Those of you with any darkroom experience will no doubt be chuckling quietly to yourself at this point. Developer kills fixer. The sole purpose of stop bath is to neutralise the developer so that it can't ruin the fixer.

So I'd managed to write off the fixer, while leaving my negatives in developer for 9 minutes longer than I intended. Disaster! The longer you leave them in, the darker and more contrasty the images become.

Still, the negatives didn't look too bad, so I hung them up to dry and hoped for the best. By the time I went back to see if they'd dried, everything had gone black!

Feeling slightly miffed, I chucked the film in the bin. The next day I discovered that if you don't fix a film for long enough it won't go clear, but you can always re-fix it later (thank you, Internet!). The film came out of the bin, went back into a tank of fresh fixer, and (much to my amazement) images re-appeared.

The results are rather grainy. I suspect an extra 9 minutes in a developer/fixer cocktail while being agitated slightly too roughly can do that.

I can't help noticing that I'm a lot more attached to these images than I would be if I'd just snapped them with a digital camera. There was a significant amount of effort expended in creating them, and a three week delay (while I mustered up the courage to develop my first roll) before I got to see them.

It doesn't really matter to me that the grain is coarse or that few of them are sharp. The point is, I made them. As I write this they're upstairs in a ring binder. They're tangible. 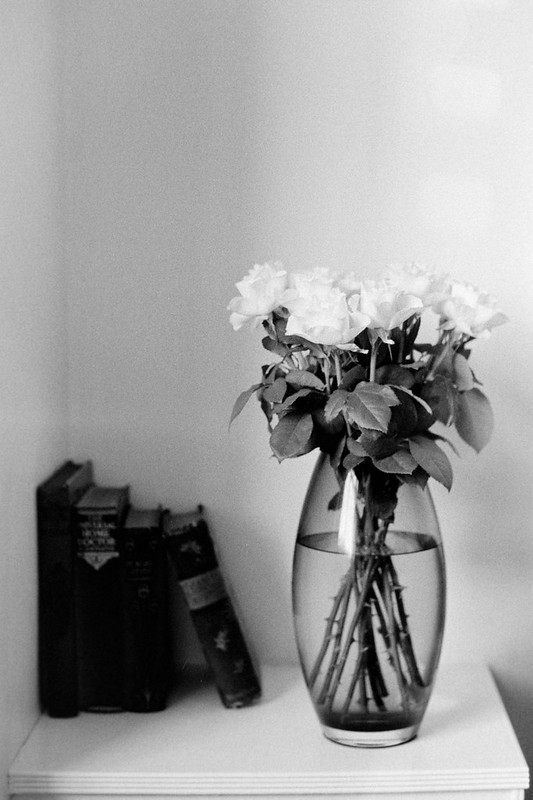 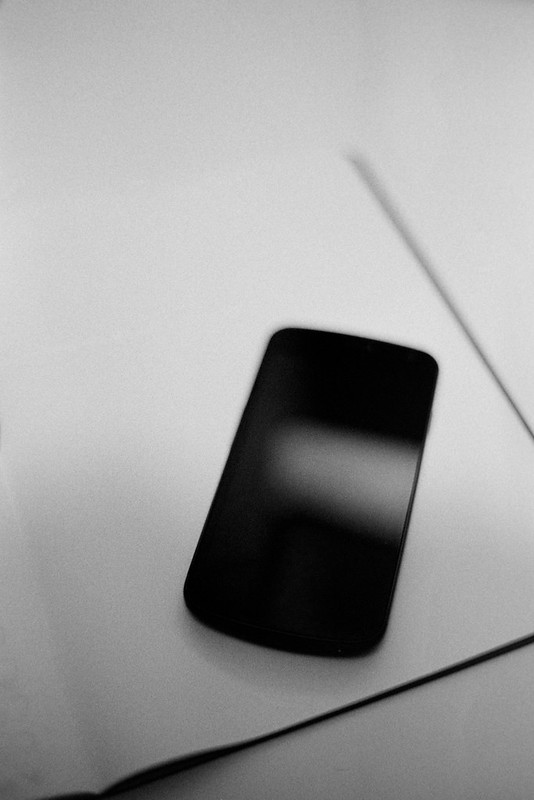 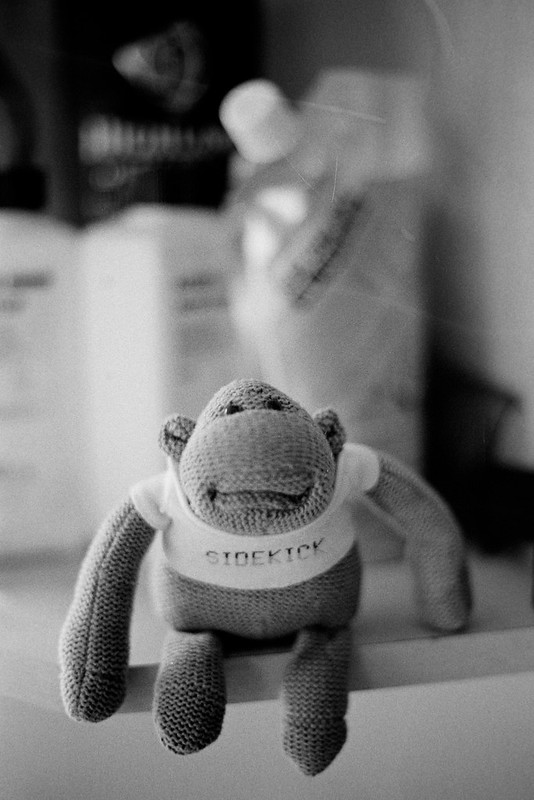 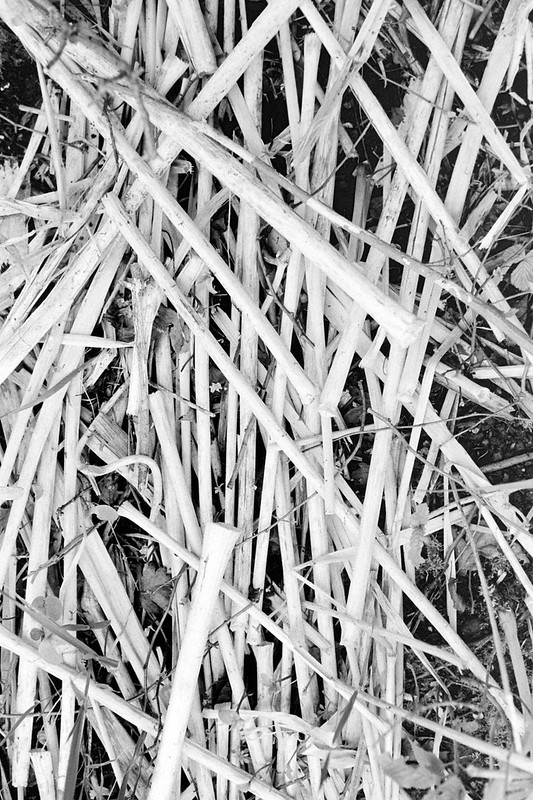 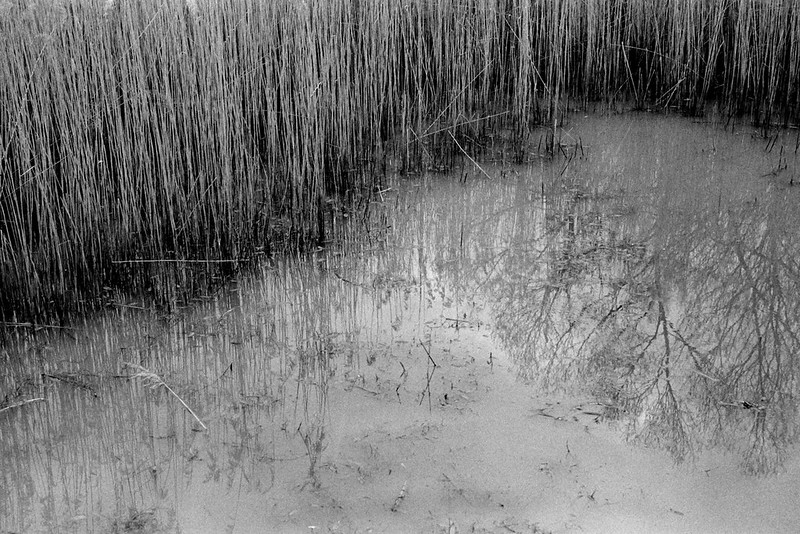 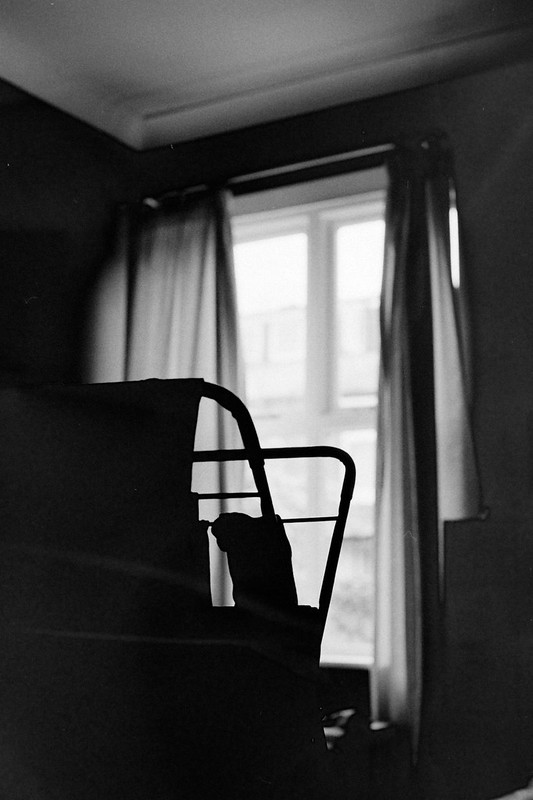 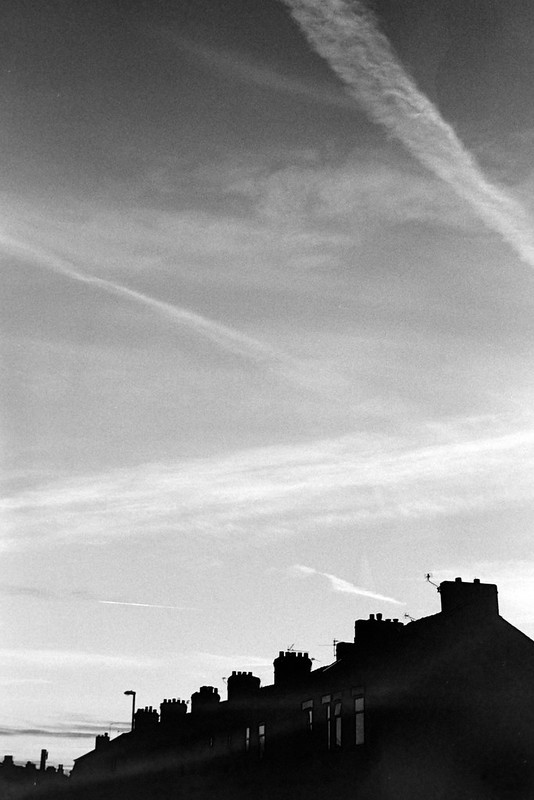 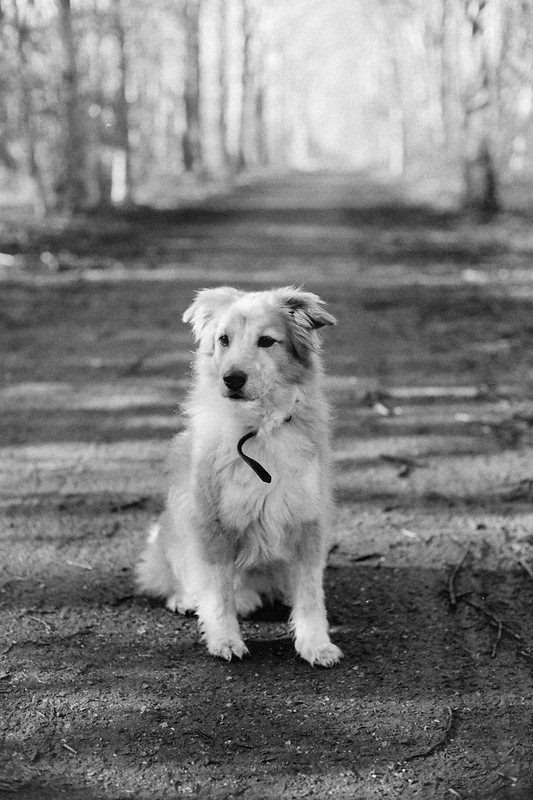 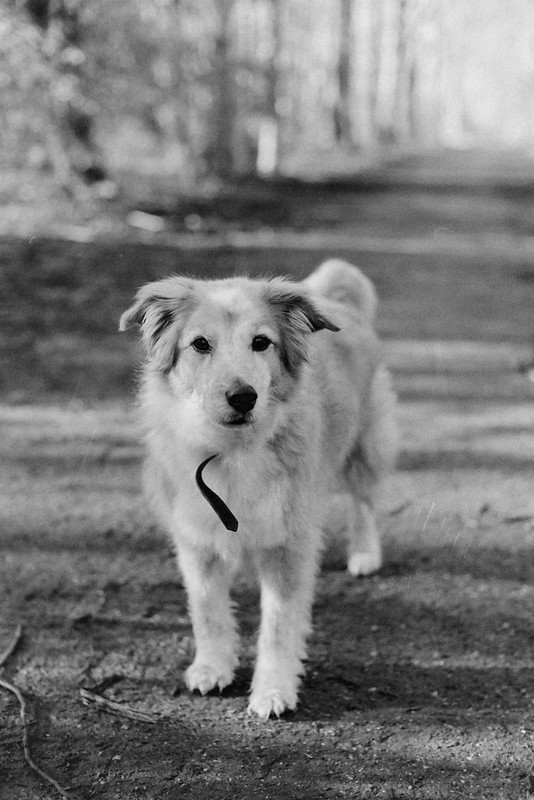 I haven't talked about my recent camera purchases, but I took these on a Pentax MX (the K1000 is currently off having its first service in 27 years) with an SMC-M 50mm f1.4 lens.

Scanned with a Panasonic GF-1 and 50mm f4 Takumar macro.